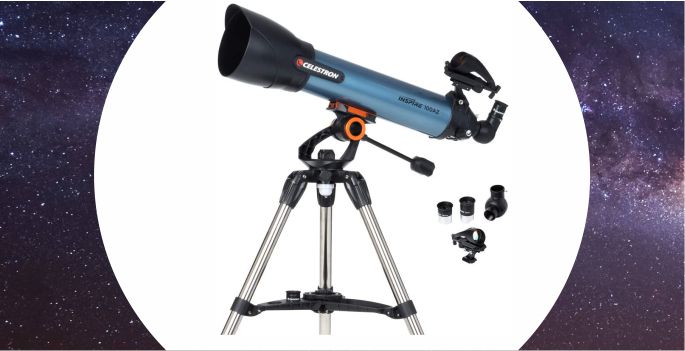 Are you wondering why this beginner refracting telescope costs more than some alternatives?

It’s the large 100 mm aperture that gets you more light which equals more seeing.

Having almost 4” in aperture from a refractor provides great potential to spot galaxies, planets, and to observe intimate surface details of the moon.

It also comes equipped with a diagonal that allows terrestrial viewing.

You can watch birds and animals, observe the skies, and possibly spy on the neighbors – not that you approve of such behavior, right?

Our Verdict: The Inspire 100AZ is a good, beginner refractor telescope. One of its most promising features is its large 100 mm aperture that is bound to show you more than a typical beginner’s scope that costs much less. Everything is kept simple to ensure easy handling, and if you wanted to dabble with taking photos of the amazing things you see, it comes equipped with a built-in smartphone adapter

Who is the Celestron Inspire 100AZ Best Suited to?

This cheap refractor telescope is designed for the entry-level market with a large aperture for beginners to astronomy. To make it appealing, it also comes with an Amici prism for correct-image orientation viewing for instant suitability for terrestrial use. The Inspire also has a couple features that are unique to the scope that makes it especially user-friendly for beginners and an excellent telescope under $300.

Experienced users will find the Inspire lacking any serious quality to find a use for it, but beginners will find it acceptable for the many occasions they pull it out for. At some point, an upgrade will be required, but it will do the job for travel, terrestrial viewing, and seeing out into space as you get started on your new journey.

How Does the Celestron Inspire 100AZ Perform?

The Celestron Inspire is one of the cheaper refractors in the market that serves as a decent telescope for kids or for beginner astronomers. As a medium-fast telescope, it performs rather well for both low-power, wide-field viewing and high-power observations.

The mount is rather simple and crude, but it provides basic alt-azimuth motion on a tripod that can be adjusted for various heights.

With a nice and large 100 mm aperture, you have a great amount of light-grasping ability to capture everything expected of a 4” telescope. You’ll enjoy the challenge that will come with seeking out galaxies and nebulae.

Planets and some of their features can be seen like the Giant Red Spot on Jupiter and some of its cloud bands and moons. You can also see Saturn, some moons, and the Cassini Division. The phases of Venus and Mars can be observed, but Uranus and Neptune will only be visible as dots.

The moon is fascinating to look at through the Inspire telescope with clear resolution and good contrast. However, you may see some chromatic aberration, but it shouldn’t be too distracting to the amateur user.

The focuser is a micrometer that comes with a numbered scale that allows you to memorize a focal point for a target at a known distance. The scale starts from 0 and maxes out at 10 which represents infinity. Celestial objects will be focused at infinity, so the micrometer is really only good for terrestrial targets. It would only be helpful if you’re observing from the same location each and every time.

For example, if you’re using the scope from your backyard and you have a clear view to a birds nest 50 yards away and a fishing dock 100 yards away, you can memorize the numbers the micrometer is set at for those two points. You can then easily and quickly set the micrometer to those points the next time you want to observe those same targets at that distance.

While this telescope isn’t made for astrophotography, you can use a smartphone to take photographs of both sky bodies and land-based objects. The lens cap actually doubles as the smartphone adapter and allows you to attach your phone with bungees and anchor points to provide a secure setup.

As a refracting telescope, you can use the Inspire 100 for observing terrestrially. The 90-degree erect image prism is a diagonal that provides correct image orientation. The angle is comfortable for celestial use, but it provides images that are right-side up and correct left to right for birdwatching, wildlife observation, and more.

What some buyers find frustrating about the mount is that it may be too light-duty, so there is some movement when you change out the accessories or focus if you don’t have it level or on a solid surface. However, this is a true flaw of all tripods on unsteady surfaces.

There have been reports that that mount is quite sturdy, so it may take some practice, adjustment of its height, and/or a counterweight to achieve a solid setup.

Mount movement may not be as fine as conventional alt-az mounts. But, when you consider the price of the total telescope package, it’s acceptable.

Does the Inspire Telescope come with a Flashlight?

The Inspire 100 AZ comes with a built-in flashlight that sits right in the mount’s center hub. Turning it on allows light to be directed straight to the accessory tray so that you can see your eyepieces and other accessories. You can also remove the flashlight and use it for illumination for other purposes.

What Type of FinderScope is Included with the Celestron Inspire?

A StarPointer Pro finderscope is included with the Inspire 100AZ telescope. It’s simple to mount and easy to use. It’s like a red dot sight, but instead of a red dot, it has a reticle-style aiming point. It mounts to the top of the focusing assembly via a dovetail and setscrew.

What Eyepieces come with the Inspire 100AZ Refractor Telescope?

Celestron includes 20 mm and 10 mm eyepieces. They’re good enough to get started with, but a shorter eyepiece like a 6 mm may help with getting closer to planets. You may find that short eyepieces tend to be uncomfortable with the short eye relief, so perhaps a quality Barlow lens will help to get that extra view without compromising comfort.

Is this a Good Telescope for a Family?

The Celestron Inspire is specifically made for beginners. It’s easy to use to find bright objects like the moon, planets, and bright DSOs like Andromeda, Orion, Trifid, and more. The erect image diagonal that is included provides quick object acquisition especially for terrestrial viewing.

A built-in smartphone adapter is also included to make taking photos with a smartphone easier. It can be assembled quickly, comes with an LED flashlight, and the tripod legs are adjustable, so it can be outfitted for the ideal height for any user.

The Inspire is not the highest-quality refractor by any means, but it also doesn’t cost an arm and a leg. It’s cheap enough that you can get 4” out of it and share the views with the entire family.

Its specs put it within the medium-speed range, so it will be a telescope that provides a taste of everything.

Don’t forget that it has some extra perks that may prove helpful for beginners and for taking photos.

These ingenious features will add enjoyment to your observation sessions whether you’re seeking out Andromeda or watching a herd of grazing deer – not the neighbors, right?