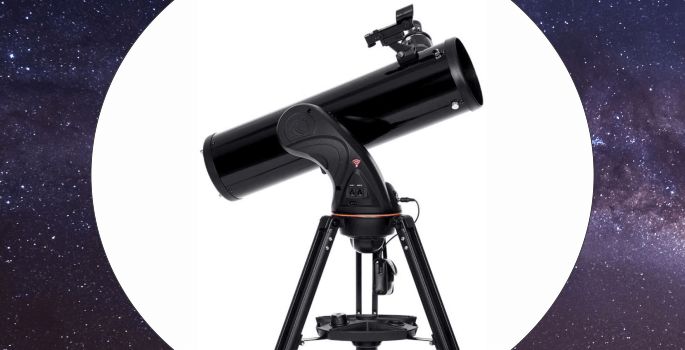 The Celestron Astro Fi 130 is an excellent telescope that deserves more praise and attention.

It was released to the market in 2017 as an attempt to provide buyers with an affordable motorized telescope with some decent astrophotography capabilities.

What is the consensus?

For the price, you may be wondering about Dobsonians. Before you go that route, check out the Astro Fi as it’s a decent alternative and you may find yourself quite satisfied with value and performance.

Our Verdict: The Celestron Astro Fi 130 has a great optical tube with excellent visibility of the moon and planets and a surprisingly good mount system. Even though the focuser is limited to 1.25” attachments, it performs well, and overall, the telescope offers plenty of potential for beginners.

Who is the Celestron Astro Fi 130 Best Suited to?

At its price point and with its capabilities, the Astro Fi 130 would make a good telescope for a beginner or intermediate level observer. As a Newtonian telescope, it will need to be collimated, and this can be a difficult process for a beginner as it doesn’t come with any collimation tools. So, add some equipment to your cart before you check out if you don’t already have the necessary tools to do so.

While some GoTo telescopes just won’t do for a beginner, the mount system is well-equipped to hold up the tube and necessary attachments. In this case, the Astro Fi is an appropriate choice for the learning observer and features on our list of the best telescopes under $500.

Not all “cheap” motorized telescopes perform well and it’s usually due to the mount system. Typically, an undersized, shaky, and antiquated system outweighs the benefits of having motorized tech at all. Fortunately, the Astro Fi is a different beast altogether that results in improved performance and adds value to the buy.

As a “fast” telescope, it provides decent wide field of views of the night sky. Combined with the eyepieces, you have enough resolution and magnification to explore within our solar system and beyond for DSOs. The included Kellner eyepieces are 25 mm and 10 mm and provide 25x and 65x magnification. To really maximize magnification and viewing deep space nebulae and galaxies, upgrade your eyepieces with some mid-range Plossls.

One of the best advantages of the Astro Fi over a Dobsonian is its light weight that allows for ultimate portability. The entire assembly weighs only 18 lbs. The tube itself obviously has a smaller aperture than a 6” Dob, and the length is 25”. While Dobs may offer ease of use with exceptional optics, the weight and inconvenience of portability for travel may have you considering an alternative like this Celestron telescope.

Hands-free tracking is what it’s all about. The Astro Fi wirelessly connects with a smartphone app for 100% completely hands-free wireless control. The gears have been upgraded on this model and slewing is easy albeit rather slow even at maximum speed. It does need to be connected to the app to operate, and ensure you have spare battery packs to keep it going.

Thanks to the extruded aluminum, the tripod is pleasantly sturdy and steady as there is little, noticeable movement only at high power. If you want to switch to manual slewing, you can always experiment with moving the tube to another mount and tripod with a Vixen dovetail attachment.

The SkyPortal App is what connects your phone to the telescope and allows hands-free tracking. By tapping an object on the app, the telescope will automatically slew to it for visual observation. Aligning the telescope is a breeze as you only have to click the “Connect & Align” button when prompted.

Many users have had issues with this app, but Celestron has released firmware updates to address these bugs. You can also incorporate the Starry Night Special Edition Software to learn more and plan for your next observation. According to the manufacturer, both databases offer over 100,000 objects, but obviously, the Astro Fi will not be capable of picking out all of them.

From the get-go, the Astro Fi is not a long exposure astrophotography telescope. You should not be using a DSLR camera with it because it is unable to achieve focus with a short focal length. However, you can use a smartphone to capture images of the moon and planets.

The lens cap comes with a built-in smartphone adapter that allows you to attach it to the eyepiece for taking photos or recording. It may be somewhat of a crude design, but it’s definitely better than trying to freehand it by aligning the camera with the exit pupil of the eyepiece.

The main gripe about reflectors by beginners is the issue of collimating a telescope. A collimator cap or laser are helpful tools in getting it done, but the Astro Fi doesn’t come with any tools for this process. As it may not be an issue for an experienced or even intermediate user, a beginner should research how to perform collimation and purchase additional tools to make it easier.

Although the focuser is mainly made of plastic, as are most focusers included with entry-level telescopes, it performs well and is steady, although, a little rough at high magnification. However, the issue, if you consider it an issue at all, is that it only accepts 1.25” eyepieces. So, intermediates or users who want to attach 2” accessories will not be able to do so. It’s not a deal breaker, but it does limit you somewhat.

What Type of Batteries does the Astro Fi 130 Take?

To get maximum battery life to power the motor drive and Wi-Fi, it’s best to use a 12V DC power supply. It would be wise to take an extra, rechargeable battery pack if you’re observing in cold conditions as battery life can drain faster as it struggles to function.

Can you Take Photos with the Celestron Astro Fi?

The Astro Fi comes with a lens cap that has an integrated smartphone adapter. The adapter attaches over an eyepiece that is 45 mm or smaller and bungee cords hold the phone in place. Considering optical specs, you should be able to achieve decent photos of the moon and planets, but long exposure astrophotography is not recommended with this telescope.

What Accessories come with the Astro Fi Telescope?

Included in the box is the telescope, mount, and tripod; focuser, 2x eyepieces, and red dot finderscope; lens cap smartphone adapter, rubberized accessory tray, and of course, the motor.

Can you use a Hand Control with the Celestron Telescope?

The telescope can’t be moved manually left or right by hand, but you can use a computerized NexStar Hand Control. Although a hand control is not included with the telescope, there are two aux ports for additional accessories that will allow for computerized hand control.

Can you use the Motorized Telescope without the GoTo Function?

The directional controls on the app allow you to observe objects in the sky or view whatever you point it to without depending on the GoTo function to find objects. It’s a good method to learn the night sky yourself.

There are always pros and cons when going motorized and digital such as depending on Wi-Fi, battery usage, and this model does not allow for manual slewing. However, the ability to easily find objects in the sky with a trustworthy and sturdy mount is certainly an attractive feature.

All GoTo telescopes will require a learning curve for the beginner, and the Celestron Astro Fi 130 will help you get there.

For the price, features, and light weight, it’s a telescope worth trying out!